Getting started with OData in ASP.NET Core

This post is about getting started with OData in ASP.NET Core. OData (Open Data Protocol) is an ISO/IEC approved, OASIS standard that defines a set of best practices for building and consuming RESTful APIs. OData helps you focus on your business logic while building RESTful APIs without having to worry about the various approaches to define request and response headers, status codes, HTTP methods, URL conventions, media types, payload formats, query options, etc. OData also provides guidance for tracking changes, defining functions/actions for reusable procedures, and sending asynchronous/batch requests.

ASP.NET Core didn’t support OData officially. This blog post using a NuGet package, which looks like official, but it is not.

First you need to create a Web API project with dotnet command. Once it is created, you need to add the OData package to your project, you can use the following command to do it.

For EnableQuery attribute you require “Microsoft.AspNetCore.OData” namespace. Finally, you need to modify your startup class code to add OData middleware and OData routing.

Without the routing prefix - OData in this example, all the routes will be redirected to OData endpoints.

And here is the output of $metadata endpoint. 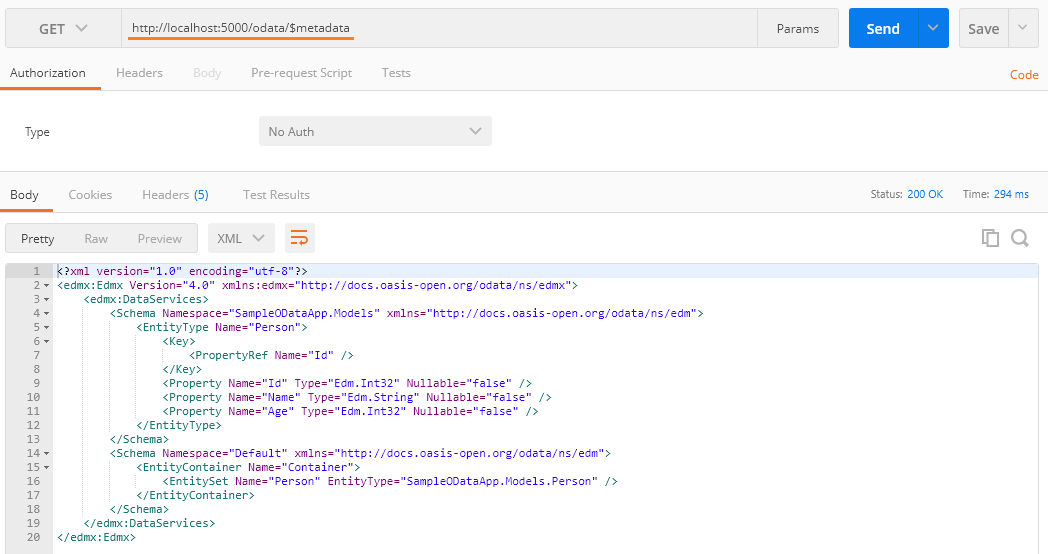 While developing the application, I faced three issues.

I got this exception while working with application. I had to spent some time exploring this issue. And finally resolved it by adding following code in Main() method in program.cs

Unfortunately, I was not able to fix this exception. As a workaround, I did something like this.